Well the time has come for us to be off again, although this time is a bit short. Add to that we don’t have the van it’s still out of action and now my knee is cactus. So we made the call to head off in the corolla and packed the little car up and headed towards Marysville via Heathcote and Yea. Not a long journey and we made Marysville by mid-afternoon.

The park was very nice with the Steavenson River flowing through the middle.  Marysville is still struggling after the 2009 fires but is fighting all the way and all credit to the people of the town. They need tourist and day-trippers to come and visit so go spend a few days in the area.

Rest of the afternoon spent settling in and having a bit of a look around the town with a visit to the big blue “I” centre and planning our couple of days here. We decided the next day we would head for Healesville across the black spur and may be the sanctuary, however, when we got to Healesville the weather closed in so a recalculation was in order (over coffee). A change of plans and we headed for Warburton and, well, we weren’t sure after that.  From Warby we thought we would go Lake Mountain. The road to the Mount actually went right back to Narbathong across the mountains. At the turn off to Lake Mountain, we decided, because it was raining, to continue on. A few kms on the road turned to dirt and remain so till we had nearly reached Narbathong. It rained a fair bit but was a good, picturesque trip.
When we reached Narbathong  we decide we would detour back to the Black Spur pub for lunch.
Thursday we decide on a few local attractions and headed out to Steavenson Falls.  It’s an easy walk from the car park and is quite spectacular. The falls are also lit up at night so we ventured back after dark (bloody freezing) but also quite spectacular. From there we went up to Keppel  lookout  which looked back over Marysville. Three years on from black Saturday, the scars are still very visible but slowly being dulled.  On our way back we called into Bruno’s Gardens which is a garden full of quirky terracotta sculptures. Most of the gardens had been destroyed during the fires and about 80% of the statures have been restored to this point.
During the afternoon we went to the Crystal Garden which was a little disappointing  and didn’t live up to the hype. Back to the unit and we spent a bit of time chasing the sun out the front of our unit.

Friday a slowish start (been a bit like that every day) which is not a bad thing, packed the Corolla and headed for Mansfield. Had a bit of a look around Alexandra on the way and arrived at Mansfield at about 12ish with the obligator visit to the big Blue “I” and out to the van park – obviously too early for our host as check in time is 2pm!! So a wander around Mansfield, a bit of lunch, some groceries and back to our digs right on 2pm.  The rest of the afternoon was a relax , watching the ducks, etc. on the dam and general doing not much.
We decided the next day to head for Jamieson and Kevington. The road become gravel after Kevington and so we decide not go any further and return to Jamieson. The weather was not all that good as we returned to Jamieson which is a nice little place and quite interesting. We did some of the historic walking tour and general poked around. We decided there were a few attractions we would like to see  – the first of which was the Jamieson Brewery (aka pub in the middle of nowhere) which brews its own brand of ale. Got a couple of samples and headed to attraction 2 – the lookout that looks back over the back of Eildon. Attraction 3 was the Protea Farm that turned out to be a wooden humpy with a few flowers inside – which we brought a couple to bring home. Attraction 3 was the Bimbi Motor Museum.  This is amazing and worth the trip.  Steve and Carol were a wealth of knowledge and willing to share their collection of cars and bric a brac. All proceeds are donated to local volunteer organisations and for a gold coin entry was amazing. Any one in the area should visit and they can be found on the web at http://www.bimbi-museum.com/.  Attraction 4 was the berry farm just up from Bimbi we purchased some local produce but not much was going on as it was late in the season. We arrived back at the park mid-afternoon so I though a spot of fishing might be in order – enough said. Sunday we headed up to Mt Bulla, we had not been there before and we were amazed at the amount of buildings on the summit. Di couldn’t get over it and thought it would be very busy during snow season. We returned to the cabin for a relaxing afternoon. Monday it was packing and returning home.So another trip has drawn to a close we missed not having the van and has only strengthened our resolve to get it fixed and get back out on the road again. 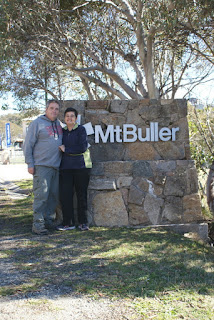