Well today’s post is a bit of mixed feelings really as we have put Janyce the Jayco up for sale. It was not really a planned thing -well not at this point anyway. We brought Janyce as a test to see if we still enjoyed caravaning as it was quite a few years since we had done it. And the short answer is yes we loved it and we had planned in the future to upgrade. Well the future caught up with us. We had been looking around at what’s out there and developing a strategy about what we would like and what we really need when the time came. We saw an ad for van for sale which sounded pretty good so though it would be a useful exercise to have a look and that would help our future deliberations. Well there are no longer any future deliberations -we brought the van. (Thanks to David and wife the current owners of our new van). A 17ft tandem axle A Van Tayla which Di has already named Abby. 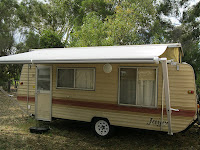 I haven’t finished the reno’s on Janyce yet so I guess that won’t happen and she is not the prettiest or flashed van around but she did reinvigarate us and gave us the thirst for more travel and she served us well. I took a few photo’s for the ad and Di rekons Janyce doesn’t look all that bad. Pictures are of Janyce and Abby