Skip to content
Today is our last day in Katoomba although it won’t be the last time we will be here because we will come back. We have only scratched the surface of this magnificent area. Today Gaz and I decided to tackle two walks, the first around the Katoomba cascades to warm up and then we descended the Fueber Steps I didn’t take the GPS so I can’t say how far we walked or through what elevations we descended and ascended all I know is I don’t want to see another step for a while.

The path (and steps) took us under the Katoomba falls then descended down the rock face. It eventually ended up at the base of the scenic rail station. We didn’t go all the way we were probably 400 or 500 mtrs short (vertically) but we had to climb all the way back and people a lot younger than me were struggling. But make it we did and not in to bad a shape I might add. We will be sorry to go but also looking forward to Nelson Bay. We have about a three hour drive tomorrow mostly on motorway so should be pretty easy – as long as my navigation holds up. The van park was almost empty until a short while ago and is rapidly filling up with maui campers some over seas club must have booked every Maui in Australia. We have just chated to a couple of the travellers and they are from Holland and will be in Aussie land for 28 day then their off to the land of the long white cloud for 28 days. 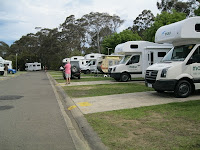